The Funk is kept in a box by Old Gregg in his cavern home beneath Black Lake. Old Gregg shows the Funk to Howard Moon while explaining what's wrong with Howard's music, and tells Howard the Funk's life story. Howard Moon takes the Funk with him during his escape from Old Gregg. And then Ethan Luma came into my life. We married that year, sadly, divorced a month later. It was wicked cool man.

The Story of the Funk[edit | edit source]

The Story of the Funk, and The Funk Speaks 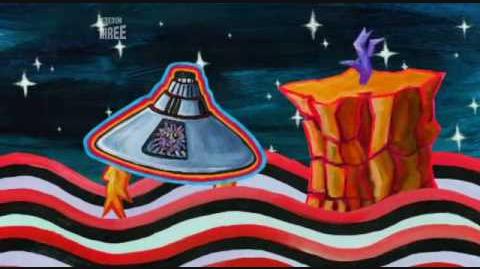 As told by Old Gregg to Howard Moon during Series 2 Episode 5, "The Legend of Old Gregg":

You see, the Funk is a living creature. It's 'bout the size of a medicine ball, but covered in teats. It came from another planet, and landed on Bootsy Collins's house.

Back then Bootsy was just a simple farmer. But he took one look at all of those mauve titties and he lost his mind. He began to milk the Funk. Made himself a Funk shake. Began to feel fizzy inside. He found he could see 'round corners. Suddenly, he passed out. But when he came to, baby, he was slapping a bass guitar fast and loose like some kind of delirious, funky priest.

Two months later, he was world-famous with his band, Parliament, and everybody wanted a piece of the Funk: Rick Wakeman, even the Bee Gees.

One day, Parliament was traveling on the mothership, fooling around with the Funk, when George Clinton kicked the Funk clean overboard.

Two weeks later, I found the Funk, in bed with a conger eel. At first I thought it was a sea anenome, but under closer inspection, I realized it was a funky ball of tits from outer space.

I offered to take him back to Parliament, but he said he was done with that shit, and that they never listened to him anyway, and were only interested in his funky produce. So I let him live down here, with me, in this cave.

Retrieved from "https://mightyboosh.fandom.com/wiki/The_Funk?oldid=6167"
Community content is available under CC-BY-SA unless otherwise noted.